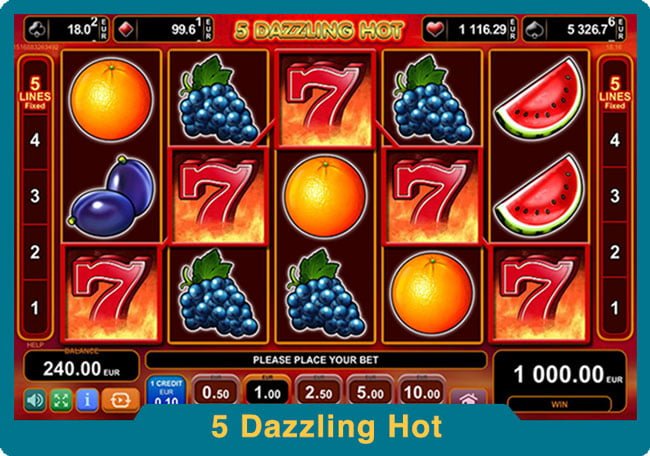 The abbreviation EGT stands for Euro Games Technology. This is a company that provides casino games software to the biggest online casinos and gaming halls. The company originated in 2002 in Bulgaria and obtained a license from the State Gambling Commission. Over the years, this gambling provider has extended its reach in Eastern Europe. The developer also introduced itself to the global market by retailing its products in South America, North America, Asia, and Africa.

Euro Games Technology Ltd. became a player in the gambling field in Bulgaria in 2002 - that's when the company launched its enterprise and started demonstrating its products. At that time, their first game - Gladiator - was presented. In 2003, several more casino games were launched, and slot machine fans surely remember these hits - Gold of Roma, Oil Company, and Crazy Bugs. One year later, EGT opened an office in Romania and started offering its services in many Eastern European countries - Romania, Latvia, Russia, and Ukraine.

Over the years, the company grew recognized all around the globe. The team became popular for its Vega Vision Slant Top and Vega Vision Upright slot machines. For the first time in 2008, EGT manifested itself in Las Vegas and participated in the G2E exhibition. Some new games have been added to the company's portfolio - such as electronic blackjack and electronic roulette. The slot machines of Euro Games Technology began to be distributed in the capital of gambling - Macau.

The company developed unique multiplayer slot games and introduced them to the world. Everyone was overwhelmed by these products, and they became widely popular throughout the gaming halls and online casinos. The operator entered the Italian market, where it gave out superior offers for jackpot slots from the Egypt Quest series, which are now available on the Bulgarian market. Nowadays, EGT casino games are known virtually all over the world - Asia, South America, North America, Europe, and Africa.

What types of games does EGT produce?

There is no doubt that the company's slots produce the most considerable interest among players. Their so-called slot games cover a wide variety of genres, including fruit slots, cartoon and fantasy characters, interactive video slots, slot games with jackpots, pyramid slots, and more. Of course, the list does not consist of slots merely - the first-class provider also offers video poker, European roulette, keno, bingo, blackjack, baccarat, and dozens more.

The provider's games offer excellent graphics and impressive sound effects. All of their brand-new products run on computers and laptops, as well as on mobile devices, such as smartphones or tablets. They offer world-class design, along with a user-friendly interface. The big Bulgarian online casinos: Efbet, Winbet, and Palms Bet provide a large-scale assortment of these products. You can also find EGT games in many other major international online casinos such as Bet365, Bwin, PokerStars, and many more.

Euro Games Technology also produces some excellent games for land-based casinos. The company's slot machines can be discovered in Bulgaria and many other countries around the world. There are over 170 games in the provider's portfolio so far, which makes its business card truly impressive for many.

Where are the company's slots distributed?

As we have previously mentioned in the history of EGT, their products are distributed almost all over the world. In the beginning, they sold their products in Eastern Europe only. Still, today more continents and hundreds of countries have been added to the list. To be accurate, we will provide you with a short list of the countries where the company's products are distributed. This is not the definitive list, as the games' distribution is expected to extend to other markets:

Which are the most successful EGT games?

The company's game selection is so extensive that we can't readily point out the most popular among them. However, some titles can be recognized as real hits. Many of you have probably seen them in the online space or the land-based casinos. Those of you who didn't, can read the following paragraphs, where we will make a brief overview:

All these games are just a tiny part of the company's portfolio. EGT offers an extensive variety of slots, which can be broken down into separate categories according to multiple criteria such as the number of winning lines: casino games with 40 lines and 20 lines.

RTP of the games

A particular thing about the Return to Player rate (RTP) of EGT games is its exceptionally high percentage. The return usually is over 90% on slots, poker, and more. If you play the 20 Super Hot or 40 Super Hot slot bestsellers, for example, you will notice an RTP of 95.79% and 95.81%. So, we can presume that the provider's slot games pay out regular winnings to players, which is good news for every slot fan.

The high percentage of the RTP (Return to Player) is among the reasons why the company's casino games are favored by many. At our Casino Robots website, you can discover reviews of all games and find out about their RTP. Last but not least, we have submitted the free versions of the slot games and poker games of Euro Games Technology ltd.

EGT as an employer

Diverse viewpoints can be discovered on the Internet regarding the achievements of EGT as an employer in Bulgaria. In most cases, the feedback is positive, suggesting that salaries are paid regularly, with additional vouchers and bonuses given out separately. The company's employees claim that the company's offices themselves are superb, as well as the discipline. Of course, to be honest with our website's visitors, we need to also mention the criticism of many people.

Former EGT employees from multiple departments reveal that the pay is not satisfactory enough compared to other software companies. Particular people are also mentioned, which are subject to criticism. However, we have not personally investigated the company's salaries, so we cannot make any comments on the subject. However, we have to remark the positive feedback related to the friendly working environment, the precise payment of amounts due, the harmony between co-workers, and yet the influential status of the brand.

You can find more information about the employer's performance if you do your research on the Internet. Many software professionals in Bulgaria want to apply for a job at Euro Games Technology, which is noteworthy enough and makes us believe that the casino games software giant guarantees top conditions for its staff.

Public opinion about the company and its slots

There are a lot of comments about EGT casino games on the Internet. Most players like their slot games and play both their free and paid versions. The most commented hits are the 20 Super Hot, 40 Super Hot, and Age of Troy, which we already told you about in the company's overview.

Some share their positive feedback on the RTP of the games, while others fancy the idea of bonus rounds and jackpots with great winnings. As for the company itself, you can read all sorts of judgments. Not long ago, we registered a critique about the outdated technology and software products from the past utilized in the game development process of EGT. However, we cannot confirm this either.

Generally speaking, Euro Games Technology has some awe-inspiring products. Their new slot machines for land-based casinos are a true masterpiece in terms of graphics and sound. Some new online games are also on the horizon, but they are still kept secret. There is no way to validate the claims of some about operating with old programming languages and old-fashioned techniques. Our personal conclusion is that the company is one of the most prosperous casino game brands in Bulgaria, and beyond.

What does the abbreviation EGT mean?

EGT is an acronym for Euro Games Technology ltd., which operates in most parts of the world. This company started working in Bulgaria and expanded in many other markets.

Where can I find free EGT slots?

On our website - Casino Robots - we have established a broad list of online EGT slots that you can play for free. You do not need to sign up or deposit.

How to play EGT slot games with real money?

In our brief overview of the company, we have listed the licensed Bulgarian online casinos that distribute the company's products. These are Efbet, Palms Bet, and Winbet, where you can play the paid versions of the slots and try for real winnings.

Where can I find the rules of EGT slot games?

On our website - Casino Robots - we have provided detailed information on all EGT games, which also include the rules of the game. Also, after starting one of the company's slots, you will find an 'i' button, which will help you learn how to play the game you've chosen.

There is no way to disguise the fact that the EGT company is a pride for Bulgaria. The brand is known all over the world, which contributes to the advertisement for our country and the opportunities of the Bulgarians. The company has offices in different parts of Europe, Asia, South, and Central America. Millions of people play the provider's games, so we can't hold back our superlatives. In summary, we can say that this is a unique casino software manufacturer that can easily compete with the world's biggest names. We hope you appreciated our EGT overview and that it managed to provide you with the information you lacked.